You are here: What to know1 / National Contribution
Liberation Struggle 1955-1959

The contribution of the Community of Troulloi during that unique fight was quite significant. Almost all young men of the village joined EOKA, PEKA and ANE and fought for the freedom of Cyprus. Several of them were arrested and imprisoned without a trial. Four youngsters, Chrysanthos Kyriakou, Makis Papacharalampous, Andreas Kokkinos and Christos Kouloumpris were wanted by the British authorities. An elderly woman, Eftechia Zeniou, was murdered by English soldiers and monk Nectarios was also murdered by Turkish Cypriots. Generally, all the residents of the village supported that great fight one way or another.

However, the community’s contribution climaxed with the heroic sacrifice of Andreas Souroucles, who fell while fighting heroically during an ambush set at the dawn of August 1st 1958 at the location “Sameri”, near the village.

The brave young man was the son of Demetris and Christina Souroucles. He had eight other siblings and he was married to Georgia Papacharalampous, sister of wanted Makis Papacharalampous, with whom he had a young daughter named Christina. A few days after his heroic sacrifice, Georgia gave birth to their second daughter, Antroulla.

The hero cooperated with the guerrilla team of the village and maintained a hideout in his father field, as well as in his house where he offered shelter to several wanted guerrillas. Among them were sector heads Michalakis Rossides, Michalakis Parides, his brother in law Makis Papacharalampous, Chrysanthos Kyriakou and many more.

When the order for an ambush was given, the wanted guerrillas were staying in his house. They tried to find the proper place for the ambush, but it wasn’t an easy task. Finally, they chose the location with the reeds.

His fellow fighters did not want to take him with them because the hideout was in his house but he insisted. Eventually, he did go but he did not return. He was now one of the immortals.

In the attack, apart from the hero, participated Makis Papacharalampous, Georgios Vakhos, Charalampos Savva, Antonis Constantinou (the current priest of the community named Father Antonios) and Georgios N. Plarkou. Andreas was killed while the guerrillas were about to leave the area as there was a full moon and thus no adequate cover was available.

His funeral was held without permitting all of his siblings to attend. The village was under a curfew but the entire community was mentally there. After the liberation his bust was placed in the forecourt of the chapel of Agia Marina and it stands there to remind the young generations of that remarkable fight and the love for freedom.

The state, in order to honor the hero, gave his name to an army camp located in the city of Larnaka. His name was also given to a street in his birthplace, as well as to other streets in different communities. 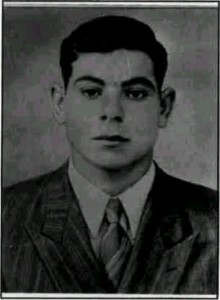 This text has been prepared by the Community Council.

The Turkish invasion of 1974 and the community

Amongst the thousands of young men who responded to our country’s call on that fateful day of July 20th 1974 were tens of youngters from the community of Troulloi. Two of them, Michael Zeniou and Nicolas Georgiou, are among the thousands of Cypriots who sacrificed their lives for the freedom of Cyprus.

He was the third of ten children born in his large family. He was born in Troulloi in 1947. His parents were Zenios Michael and Maria Papacharampous Michael. He joined A.N.E. at the age of 11 years old.

He was an excellent student and studied physics at the University of Athens, having been awarded a scholarship by the State Scholarships Foundation of Greece. He was a prominent teacher, a good Christian, a pure patriot and a brave man.

The hero, despite his young age, produced a lot of writings. Several poems, articles and letters, as well as manuscripts and other publications in various magazines, have been preserved until today.

As soon as he was called to report for duty, we put on his reservist sub lieutenant’s uniform and rushed to defend the freedom of his country. During the first invasion, being a Commander of a Heavy Mortars Company, he took part in the battles in the area of Voreios Polos and Hamid Mandres.

During the second invasion, on August 14th, he was again stationed in the area of Voreios Polos. He fought to counteract the constant attacks by the Turks. By his side was his cousin Spyros Papacharalampous. At some point a mortar projectile fell in the barracks. Michalis’ injuries were fatal and he died at the age of 27. His cousin’s injuries were superficial.

He was buried at the Lakatameia cemetery. His remains were identified in 2001 using the DNA method and he was buried with honours at the cemetery of his birthplace on October 27th of the same year. In his honour, the Church’s catechetical hall in Troulloi was named after the hero since he himself had been a wonderful catechist.

His name was also given to various streets in the Municipalities of Nicosia, Aglantzia and Aradippou, as well as in the communities of Troulloi and Oroklini.

He was 20 years old when the invasion occurred. As a reservist soldier, as soon as he was called, he reported to his unit, the Armour Battalion.

On July 21st, while fighting in the areas of Voreios Polos, he was hit by a bullet and killed. It still remains unknown where he was buried and this has always been torturing his parents, Georgios and Anna Nicola.

The community of Troulloi also suffered from one of the Turkish invasion’s most tragic aspects. Three men of the community, Costas Gavriel, Andreas Michael and Costas Fassias went missing from the war front, whereas six more people have been missing since the end of August 1974, when the Turks entered the village and looted it. They also arrested anybody who had stayed back, since most villagers had fled. These missing persons are Georgios Mellehas and his wife Anastasia, Nicolas Yianni Parpa and his wife Maria, Paraskevi Zinona and Christina Demetri. All the above were approximately 50-70 years old at the time. Finally, another youngster, Antonis Christodoulou, was murdered by a stray bullet during the coup d’état in Nicosia.

When the Turkish invasion commenced, he was an armour sergeant and served in the 385 Armoured Infantry Battalion stationed in Kokkinotrimithia. During the first invasion he took part in various battles. Later on, he was transferred to the war front, in the area of Karavas of Lapithos. On August 15 his unit withdrew in the area of Morphou, where it was, due to its advanced position, trapped after the advancement of the Turkish tanks. As a result, Costas, who was born in 1954 and was a child born in a large family by Andreas and Chrysi Gavriel, went missing and has been missing since then.

When the invasion started, Andreas was a member of the National Guard and served in the 251 Infantry Battalion in Keryneia. His battalion took part in the first battles of the invasion. Later on, it was transferred to the area of the Presidential Palace. Before the second invasion started, the battalion had been transferred to the area of Halefka. After the end of the second invasion his relatives tried to find him but they were not able to, nor were they able to find out anything about his whereabouts.

His father, Antonis Michael, an EOKA fighter, died after a few years not able to endure the loss of his son.

He was 45 years old and a father of nine children. He owned a lorry which was requisitioned upon the commencement of the invasion so that soldiers and ammunition would be transferred in it.

During the second invasion he was in the area of Palaekythro and his vehicle was hit by a bomb dropped from a plane. He has been missing since then.

This text has been prepared by the Community Council